A hardcore group of anglers solely pursue these bluegills, many of whom fish for them on the fly. Many of them dream of catching the next world record bluegill. 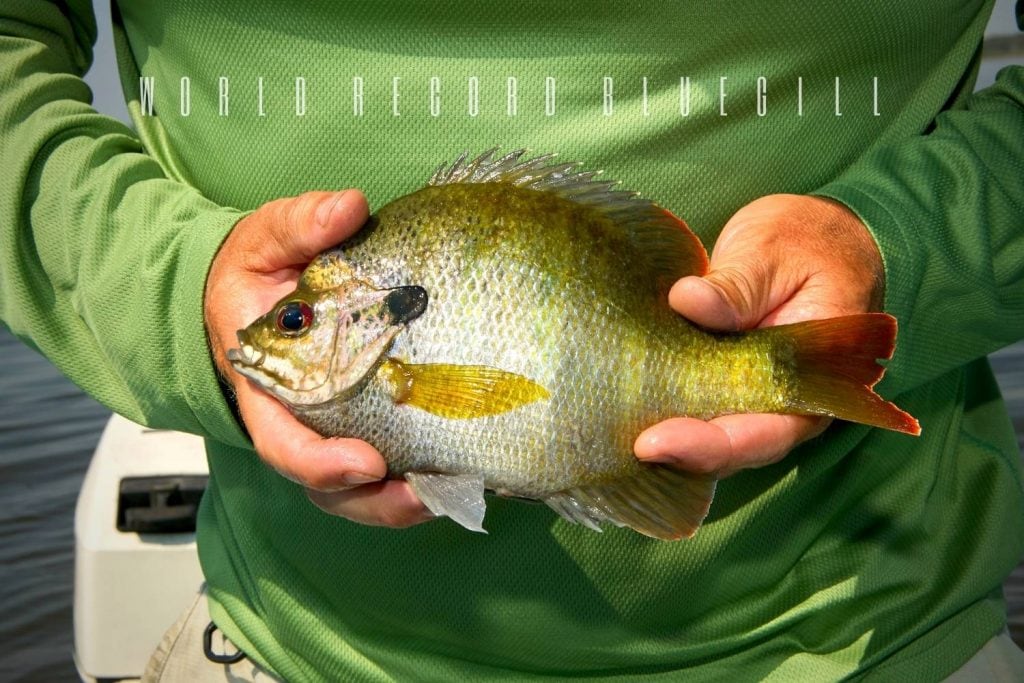 Bluegill is a common household name; we all grew up fishing for them in the local ponds or rivers. They are fished more often than not using a float bobber and a worm. Yes, it sounds very ‘story book’ like, but that’s one of the best ways to catch them and the way most of us started fishing anyway.

Bluegills are one of the most common and sort after fish species in the United States. They can be found in most bodies of water. Not only are they a great fish to catch and make excellent table fare, but they also pound for pound the hardest fighting fish you will fight in the local waters.

The International Gamefish Association world record was caught in 1950 at Ketona Lake, Alabama.

T.S Hudson caught it, and this bluegill weighed 4 pounds 12 ounces, measured 15 inches long with an astounding girth of 18-¼ inches.

Bluegill over 4 pounds is rare these days; the bigger ones being caught average around 2 pounds which is still a big fish to fight on a fly fishing setup. 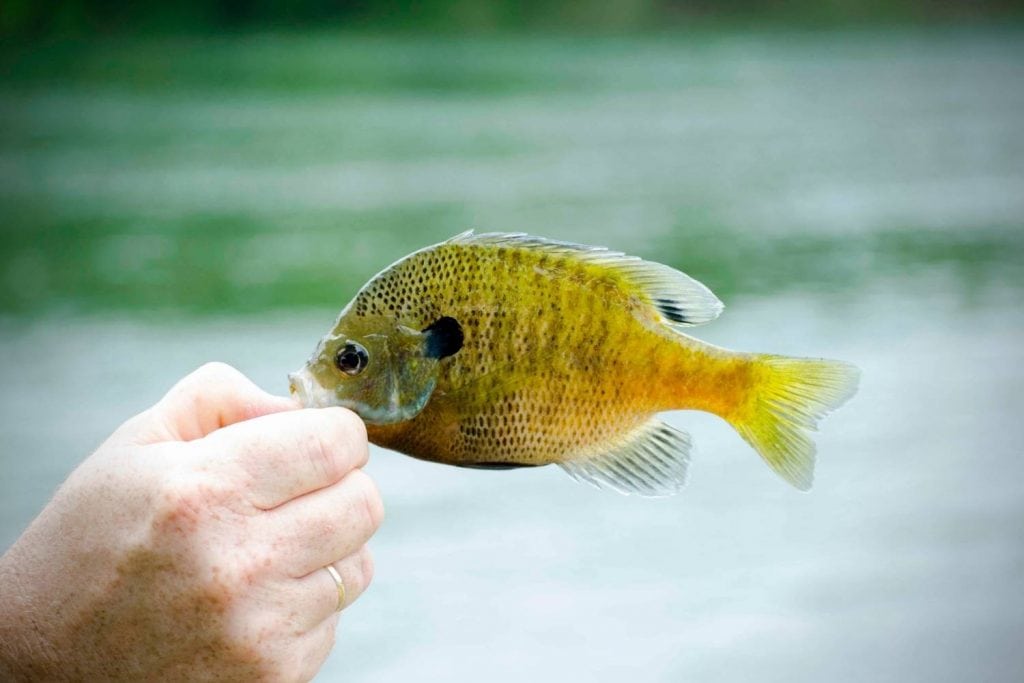 Bluegill, also known as Sunfish, is native to the Northern United States and can be found in most waters east of the Rockies.

Sunfish can be found in streams, creeks, lakes, rivers, reservoirs, or even a private pond. Bluegills tend to hold mostly in areas that provide them with sufficient protection. These areas include brush, stumps, dense aquatic vegetation, and tree-shaded banks.

Bluegills (Sunfish) aren’t just found in shallow waters; they can also be found in deeper pools where they will hold in larger shoals.

In recent years bluegills have been planted in other bodies of water around the world and can now be found in Oceania, South America, Europe, and even Africa.

In Japan, they escaped captivity and have become a very destructive invasive species; this is becoming more of an issue in countries where the bluegill isn’t a native species. They are hardy fish and will dominate any water system they are introduced into.

Where to target bluegill

As mentioned above, you can basically find bluegill in any water source as long as it doesn’t freeze over in the winter. Bluegill favors the deeper pools where they can have protection.

If you plan on fishing for bluegill, chances are you have a few spots in mind already. Work the obvious places first; shallow waters with a cover or the deeper areas where the water grass ends well below the surface are the first spots to try.

Other obvious areas would be banks with submerged trees or brush near them, any stumps or lily pads, or even around artificial structures like docks or piers.

The nice thing about bluegill fishing is that you can do most of it from the river bank.

If you have access to a boat and want to target bigger bluegills, then target these deeper waters. The suspended bluegills are generally much bigger in size but more tricky to catch as they are always moving around.

Tips for catching bluegill on a fly rod 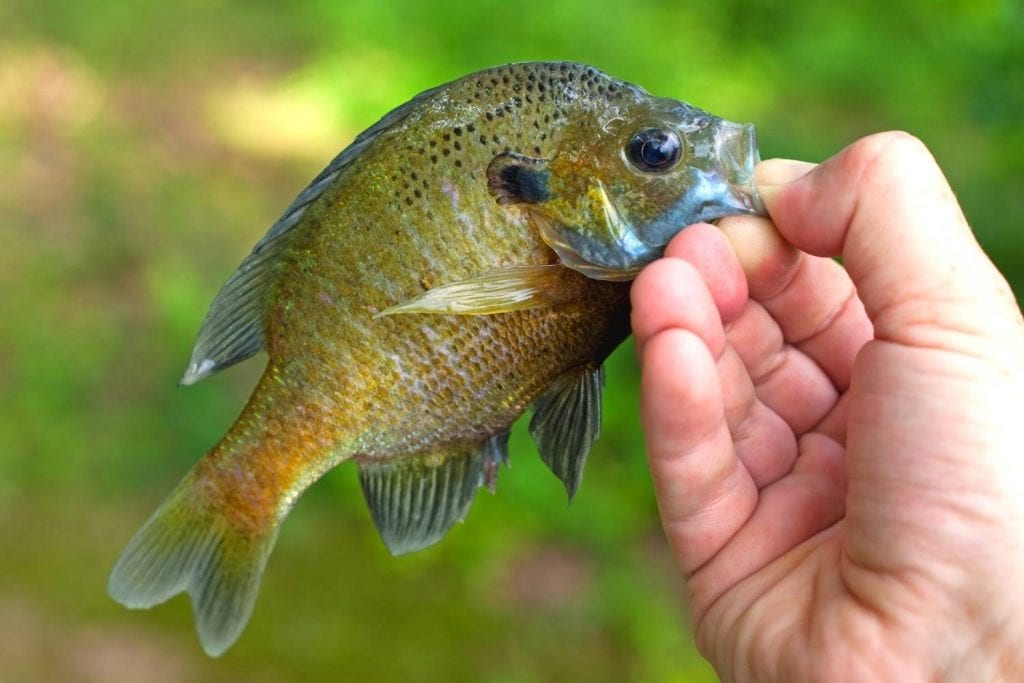 The best time of the day to target bluegill would be early mornings or late evenings, just before dark.

Your world record size bluegill will be holding in the deeper water columns. As a fly fisher, you need to use a full sinking line. I would suggest a DI3 as this will get the fly down and not sink too quickly.

Focus on the deeper pools using the flow and wind to your advantage. Try to get downwind and then fish with the wind behind you, swinging the fly down and across.

Look for the wind lanes or bubble lines; these tend to hold more food, and the bluegill holds around these food lanes.

Structures are always a good bet to fish, and you will generally pull fish out of these lies.

Fast strips with short pauses will generally work to get the eat.

The fly selection can vary, but streamers work well for record bluegill. These fish are always on the lookout for a big meal, and with their aggressive nature, they cant leave your fly alone. 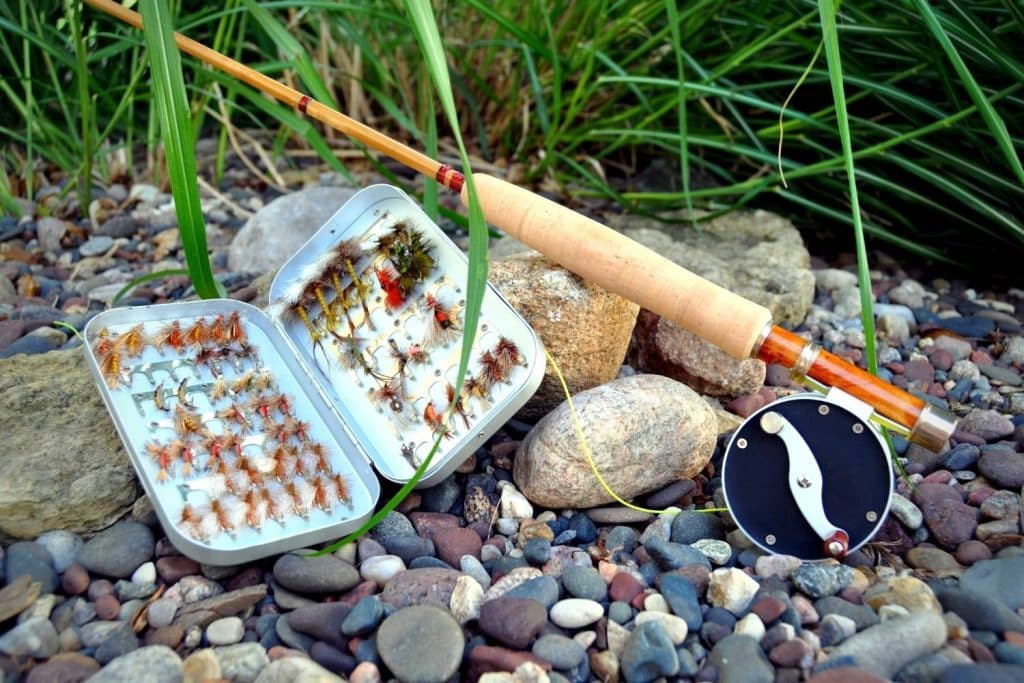 Bluegill fishing can be kept really simple. Again this is my opinion, and you can take as much gear as you want. I have found that bluegill will eat most flies, so I only carry what works best.

A good fast action 9′ 3wt fly rod would be my first choice fly rod. It is light enough to have a good fight with decent size bluegill and has enough backbone to throw a larger popper to bass if needed. A fast-action 3 wt can also punch the slight headwind if needed.

I recommend having two fly lines available when fishing for bluegill. Have a WF floating line for your surface and subsurface action and a sinking DI3 for those deeper pools when targeting those suspended shoals.

A classic Clouser Minnow is always a good choice. Size 10 to 12 in yellow over white or blue over white are good colors to fish.

Mickey Finn is a great fly to use on a full sinking retrieved at various speeds; red and yellow combinations tend to work the best.

Poppers are my favorite way to catch bluegill. There is nothing more exciting than watching a fish eat a surface fly. If you can get them up to eat, then this would be my first choice method to target them. 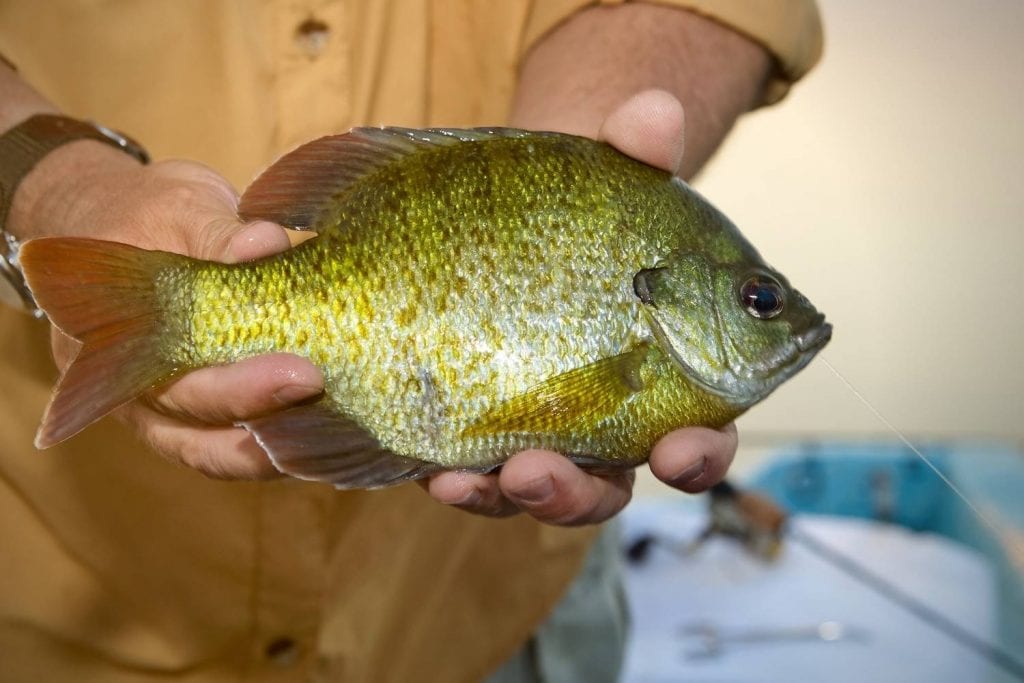 While they aren’t the biggest or most glamourous fish to catch, they certainly require your attention and a certain level of skill.

You can have plenty of fun with bluegill, and some refer to them as the gateway fish to the whole world of targeting fish with a fly rod.

If you haven’t tried fly fishing for bluegill, I highly recommend it; whether you are out on a family day trip getting the kids involved or planning on targeting those big bluegill excess of 2 pounds, you will have fun!