For 13 years now the Fly Fishing Film Tour has travelled the globe. The F3T is a fantastic experience for anglers of all ages. As the tour travels the globe it unites fly fisherman across the globe. Each year there are a wide variety of fly fishing films on display that will really get you exited to get out for a flick.

Each of the films has a specific theme be it the people, places or a specific fishery. This year the tour highlights destinations from Alaska to Florida then down to French Polynesia and onto Australia. So share this with your friends and head to your local show to see these amazing films for a night of fly fishing adventure, you’ll struggle to forget.

The following are all of the films that are being presented in the 2019 fly fishing film tour. We hope you get a chance to check some of them out, after you watch the trailers (if you’re a true fly fisherman) trust me you’ll want to!

Dave Sweet has spent over a decade helping to bring back the Yellowstone Cutthroat from the brink of extinction. Along with his daughter, Diana, a fisheries biologist, he will travel into the infamous Thorofare area of Yellowstone, the most remote wilderness in the lower 48, to see if his efforts have been successful and if the trout has returned to its native spawning runs.

The trek in is two days on horseback through some of the most rugged terrain in the west. Not to mention the highest concentration of grizzly bears out side Alaska, combined with extreme weather and unrelenting mosquitos among other challenges. Working with multiple environmental groups and government agencies, Dave has spearheaded the fight to save this native species that is said to impact over 40 species in this pristine ecosystem. Once there, he will get to witness first hand if these native fish have returned.

By Off the Grid Studios

In “NexGen,” filmmaker RA Beattie tells the story of generational bonds and friendships formed through fly fishing. In the film, Beattie offers a new perspective, as the film is told from the point of view and with the narration of Jack Buccola — a 12-year-old angler from Bend, Oregon. The film follows Jack as he experiences living in a fly fisherman’s house, witnesses the impact of fires on his home waters, and explores new waters on a road trip with his father Ryan, friend Judd Field, and Judd’s father Pete. Throughout the journey, Jack grows to appreciate the steelhead of the Northwest, the native cutthroat trout found on the South Fork of the Snake River and other tributaries, and Jack also realizes the potential for more travel with a tying business.

​Eric Jackson and Vantage Cinema present a story about ﬂy-ﬁshing, snowboarding and searching for alignment in the mountains.

Filmed on location in Northern BC, Alignment features Eric Jackson, John Jackson, Curtis Ciszek, Darcy Bacha and friends as they explore wild rivers and epic mountains while spending an entire season living in a cabin outside Terrace, British Columbia.

Eric Jackson was ﬁrst introduced to Northern BC 13 years ago while shooting a snowboard movie with Standard Films. Although he was immediately blown away with the quality of terrain the area had for snowboarding, it wasn’t until a few years later when he began traveling to the area to ﬁsh that he realized this was his favorite place on earth.

It was through this journey the concept of Alignment was realized. Fishing became more than just a pass time, it became a method to recharge from the inherently dangerous and gnarly aspects of backcountry snowboarding and prepare mentally for new challenges ahead.

It was with this in mind that Eric packed up his truck and headed north to commit an entire season to snowboarding and ﬁshing alongside his friends and brother with the goal of ﬁnding a balance in the mountains.

Shot and mastered entirely in 4K, breathtaking cinematography and a killer soundtrack accompany the crew on a journey to up their level of riding by ﬁnding a balance between the rawness of snowboarding and tranquility of ﬂy-ﬁshing.

Australia is world famous for its natural wonders, wide open spaces and multiple wild things that want to kill you. From its beaches, to the deserts, the Outback and the Great Barrier Reef, it has a lot to offer, but for fly anglers it’s coming of age as one of those truly global “bucket list” fly fishing destinations. Despite the increased attention, there are still so many untouched or remote fly fishing adventures to be had around this amazing country. Forced to pick just one, the Capt Jack Productions team rigged up and went exploring the wild and untouched coastline of Northern Australia.

South Africans and Australians, also known as “Bastards,” are long time sporting rivals, but for this exploratory trip to the remote Wessels Islands in the Northern Territories, they put aside our rivalries and joined forces to tackle some of the most technical fish species on the planet. First they have to get permission from the aboriginal landowner, Terry Yumbulul, and a quick crocodile briefing from his wife, before setting sail with the Waterline crew.

What met them on arrival? Some of the most untouched waters and amazing fishing any of them had ever experienced. Not only were there two different species of permit to target, the blocchi (Indo-Pacific permit) and the anak, they also got to grips with the main target, the infamous Blue Bastard. Long rumored to exist among Australian fishermen, the Blue Bastard was formally identified as a new species in 2015. Queensland Museum ichthyologist Jeff Johnson named the fish Plectorhinchus caeruleonothus — the Latin translation of blue bastard. Native to the Northern Australian waters, this is a truly Aussie fish. They live up to their name and drive anglers insane because of their tenacity.

Surrounded by bastards, two kinds of permit and an array of different species the squad of South African and Australian anglers lost themselves in this truly remarkable fishing.

The beautiful untouched backdrop of the Wessels Islands with its insane fishing makes Glorious Bastards one crazy ride.

Where It All Started

Karlie Roland learned to fish on the Henry’s Fork river in Idaho. Her family has a cabin in Island Park and they’ve been going there since the early 80s. Last fall she took a job at Trouthunter Lodge and returned to the river where it all started. The new gig and her move back to Island Park represents a homecoming of sorts for Karlie. She’ll be the first to tell you that the Henry’s Fork feels like home.

About a month before her job officially started she made a trip to Island Park to meet up with her family for a few days of fishing. She got to guide her dad and grandpa. Grandma was there too, but she let the boys and Karlie have at it. Local guide Keegan Barrett also joined the crew. What followed was four days of Idaho fly fishing at it’s best. The Henry’s Fork is sacred water and for good reason. The river is full of healthy fish, the surroundings are postcard-perfect and the fly fishing culture is as rich as it gets. Simply put: Island Park is a trout bum’s paradise. That’s why Karlie decided to move there.

Karlie has spent the last three years in West Seattle working for Emerald Water Anglers. And while her time in the NW has served as a jumping off point and offered up countless sea-run fish to catch, Karlie’s heart is in the Rocky Mountains. So, she traded the urban apartment for a cabin in the woods.

Where It All Started offers a glimpse into the fishing lives of Karlie and the rest of the Roland family. Four generations of Rolands have fished the Henry’s Fork and now Karlie is continuing the tradition.

Movements is the symphonic saga – in four parts (RAINBOW, STEELHEAD, MUSKY, STRIPER) – of three Alaska fishing guides who road trip their way home in a 2003 Dodge Caravan (best known as ‘Van-a White’ and for its lack of a reverse gear) from AK to NYC. From an Alaskan paradise to a literal Gomorrah in four short weeks – arriving in Time Square on Halloween night – MOVEMENTS is a stunning 14-minute showcase of what North America has to offer in terms of its diverse beauty and angling opportunities, and an invitation to rediscover where and why we fell in love with fly fishing in the first place.

The battle with the Silver King is the most sought after among fly anglers. Prepare your senses for an unrivaled cinematic experience as renowned tarpon wrangler David Mangum wrestles with the mirror-flanked launch dragons of the Florida Coast in this power-packed short.

Every so often a fly pattern evolves to significantly change the odds of enticing the most difficult fish species, which have been driving fishing guides and anglers to the brink of sanity for decades. Alphlexo is the story of how the Alphonse Fishing Company guides combined and evolved various patterns, to finally tie a fly that has revolutionized the odds of catching Indo-Pacific permit. The Alphlexo is a hybrid that combines flies like the Flexo Crab, Orvice Crab and various others to change the odds of catching the most technical fish that swim the flats of the Seychelles. The end result is a crab that an angler can confidently cast at an Indo-Pacific permit with a true belief that they have a chance at a reaction or even striking gold.

We hope you’ve enjoyed these trailers and information on the 2019 Fly Fishing Film Tour. Again, for any further information please check out the website for screening times, tickets and locations as they travel the globe. 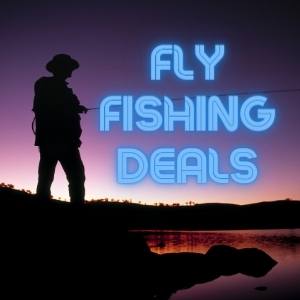