What is Spey Casting

Join me as we run through everything you need to know about this hugely useful casting technique that will add a lot to your fly fishing game when on big rivers looking for salmon and steelhead. 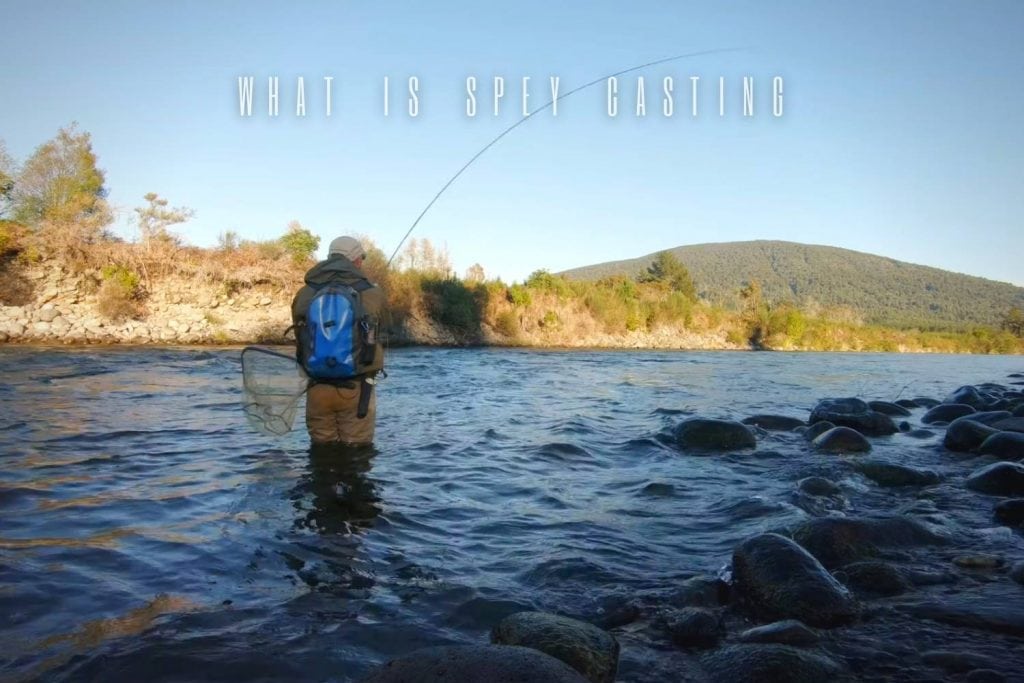 If you haven’t delved into the world of spey casting and tried out some spey casting techniques, you have most probably heard of it, but what really is spey casting? The simplest way to think about it in my eyes is as a hugely improved roll cast technique, but there is a lot more to it than that.

The History Of The Spey Cast 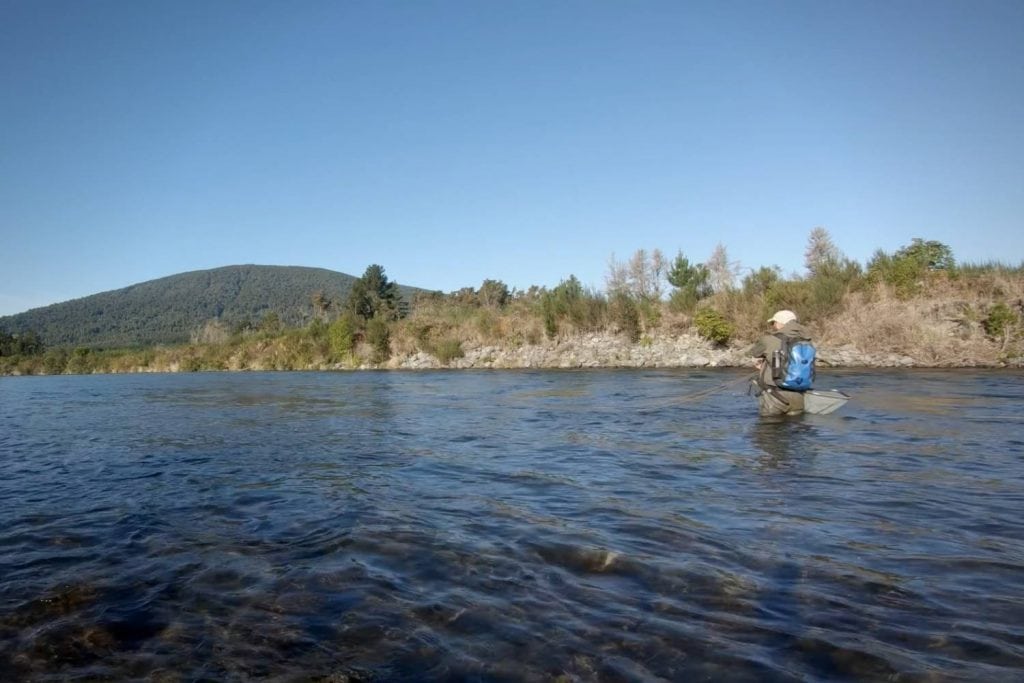 Spey casting is named after and was developed on the River Spey in Scotland and if you have ever seen the river you’ll understand why it was so necessary. The Spey is a very wide river surrounded by steep banks covered in trees and bushes.

This meant that anglers couldn’t and still can’t get enough room for a back cast using a normal overhead cast, as they would either hook the bank or not be able to wade deep enough into the river to make enough room behind them for an overhead.

This lead to developing the roll cast into Spey casting so anyone fly fishing for salmon or steelhead on large rivers could get their flies where they needed to be with ease.

How does Spey casting work? 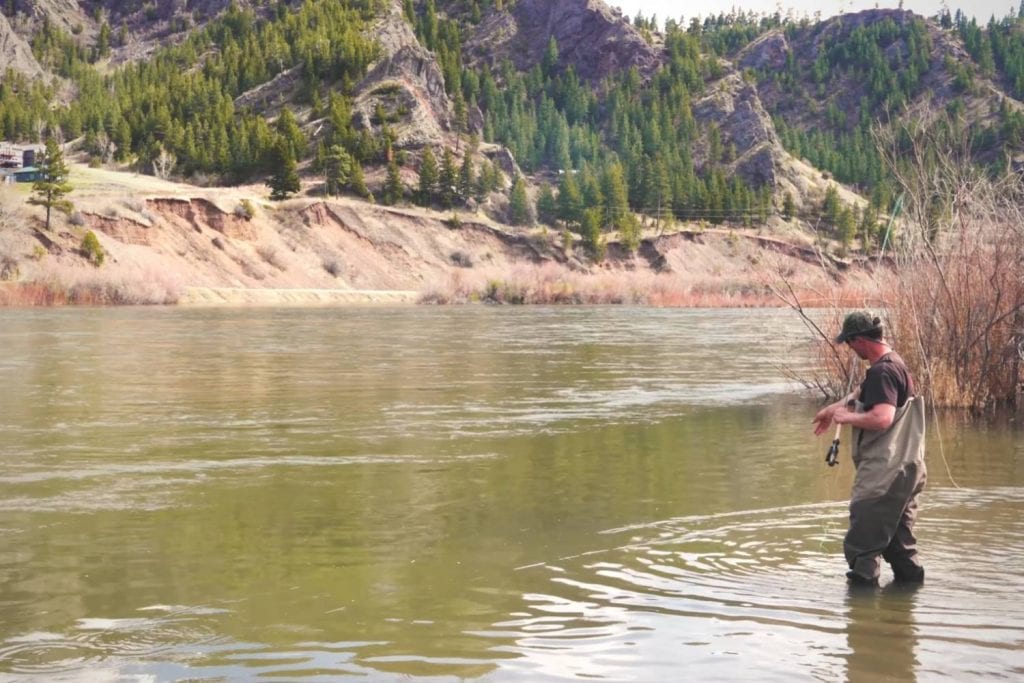 Spey casting uses the basic style and concept of roll casts that you would usually make with a single-handed rod. This means it uses the water’s surface tension and your fly line to load the rod instead of a back cast which is why it is so useful when fishing without any room for a back cast behind you.

The combination of the weight of the line, water tension, the loop formed, and the power of the rod come together to give you enough energy for shooting a line in almost any direction you like and with some serious distance.

Making roll casts with single-handed fly rods is great when you want to push 40-50 feet on a smaller river, but this isn’t quite enough distance to deliver your fly where it needs to be on a larger river like the Spey, hence the need for a Spey rod which are double-handed rods. 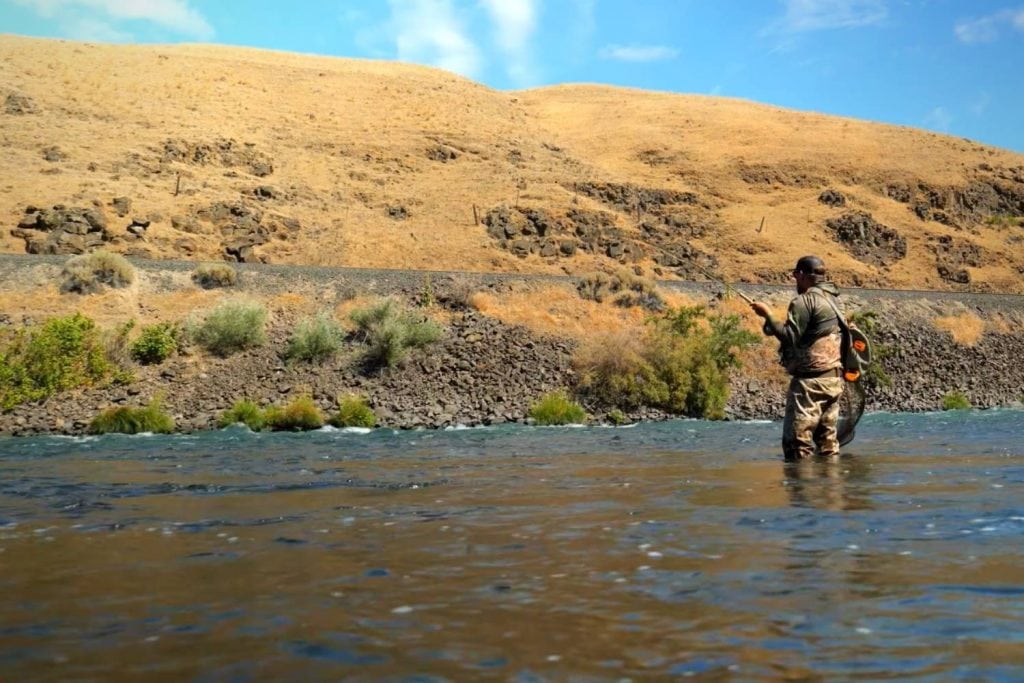 A traditional two-handed Spey rod from back in the day was around 18-22 feet and made of a wood called greenheart. Today two-handed spey rods are around 11-14 feet in length and it’s the extra length when compared to 9ft single hand rods that make a double-handed fly rod such an effective caster capable of shooting line up to 120ft.

You don’t have to have a two-handed rod to make a Spey cast though and over time, spey rods have developed into becoming both switch and single hand fly rods too.

A switch rod is basically a hybrid rod that allows an angler to make spey casts as well as overhead casts. They have a low enough weight for regular casting but have a smaller second handle on the base for anglers to make a spey cast with too and are often used on smaller steelhead rivers.

You can check out our Best Fly Rods post so you can choose what’s best for you. 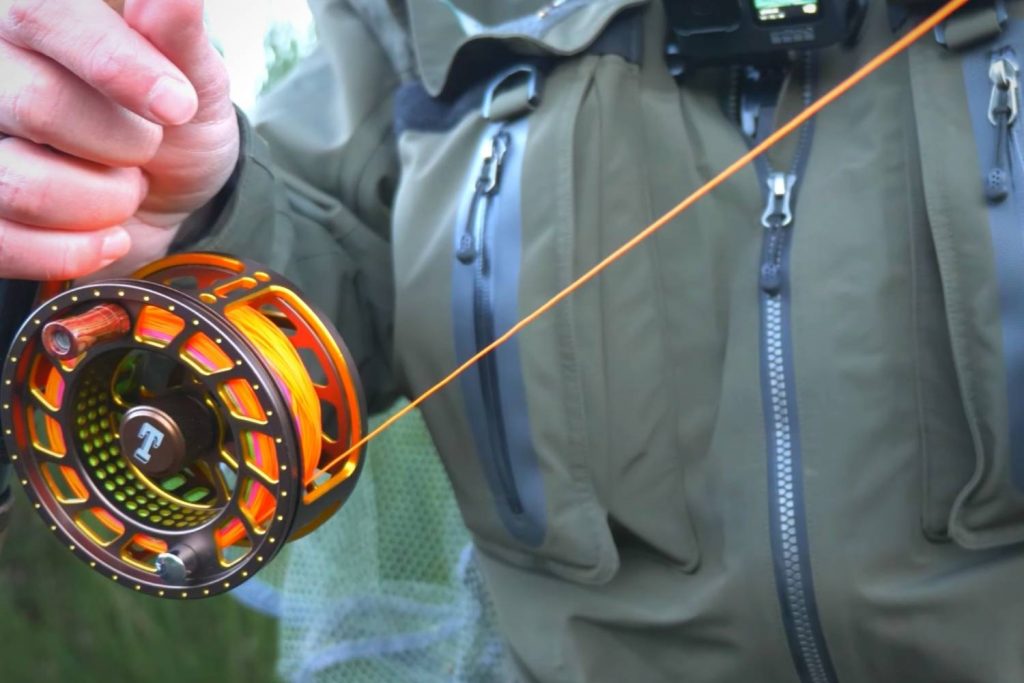 Another element required to make a spey cast effectively is having the right lines for the job. Making 120ft casts with a regular weight forward line with zero backcasts is pretty much impossible.

Spey lines have been developed to have a much heavier weight forward head so an angler can load their longer, heavier spey rod and make the long casts they need we fly fishing for salmon and steelhead on big rivers.

As traditional spey casting lines evolved over time they have formed into two main types of lines today, Skagit and Scandi lines. Both of these lines are weight-forward shooting head lines that you connect to a running line on your reel with a loop to loop connection, so you can switch between them quickly and easily on the river as needed depending on how you want to fish. 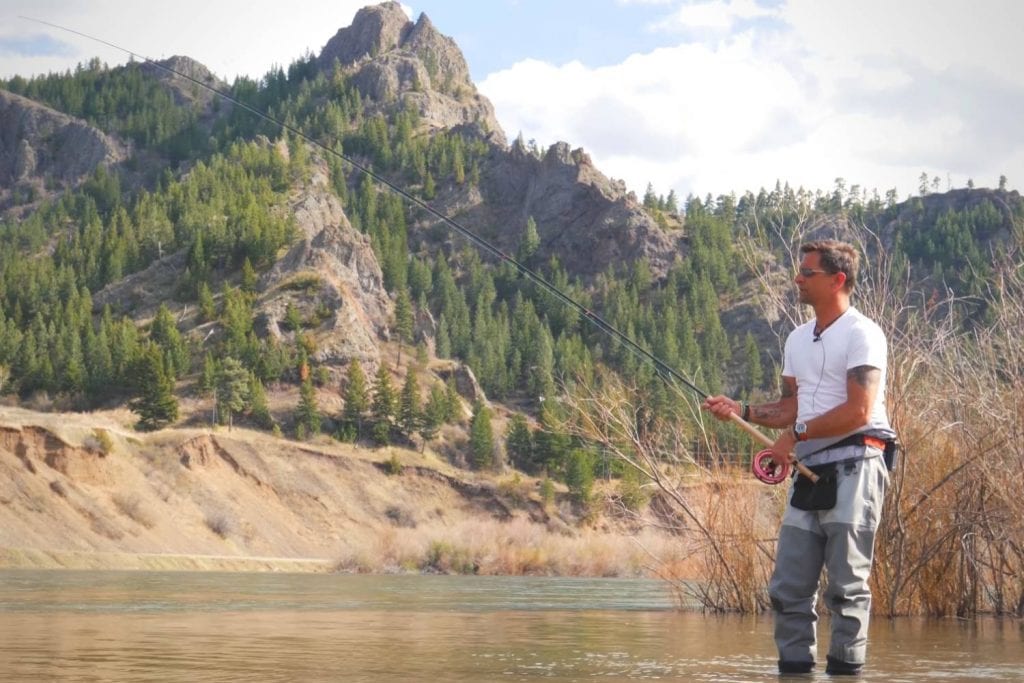 Skagit lines are the easiest line to spey cast with. They have a heavy head with a short taper that delivers a lot of power and line speed which makes it easy to when casting heavy flies and when using a sinking tip. They are ideal for winter steelhead, big salmon rivers and they deal with the casting in the wind very well.

Scandi lines are very similar but they come with a long front taper and are ideal when you want to fish with small flies and cast with some delicacy so as not to spook any fish – ideal for summer steelhead or in low water. Their main flaw is handling heavy wind and can get blown around quite easily. 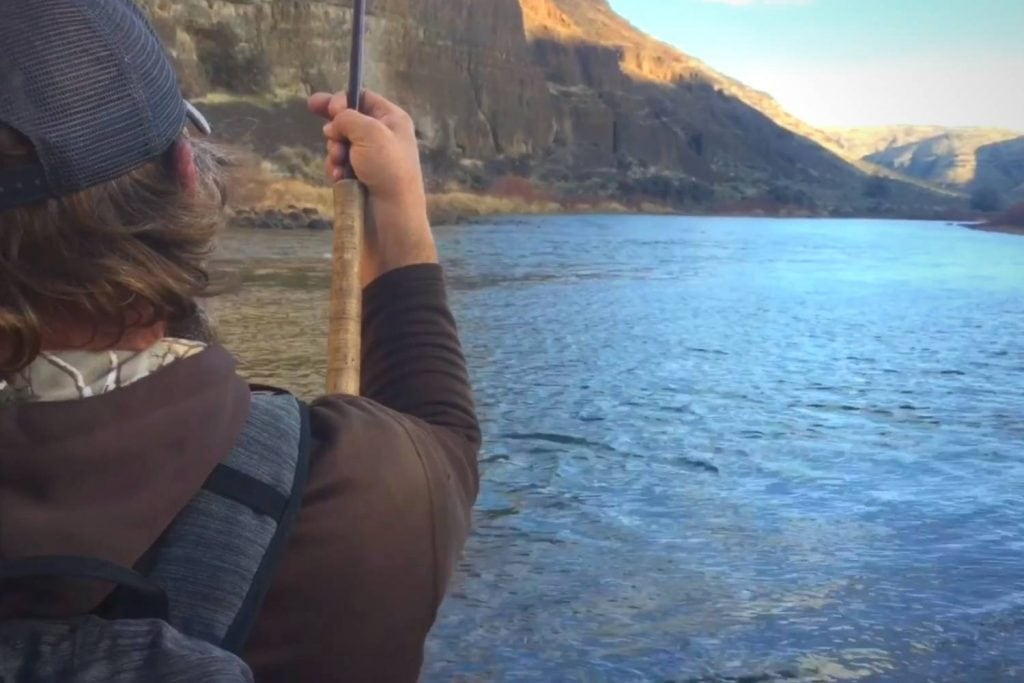 Traditional spey casting has, of course, evolved over the years, and they’re numerous different spey casting techniques and an angler can employ which every style suits each fishing situation they might find themselves in best.

The most common types of spey casts included Single Spey, Double Spey, snake roll, and the snap t. Each of these different types of spey cast allows you to change the direction of your cast when you are fishing so that you can fish from either side of the bank of a river and manged wind direction too.

For example, the single spey creates the ability to cast in one direction, while the double spey will allow you to cast in the other direction. If you want to start fly fishing with Spey rods, it’s important to master all these different techniques.

If you’re new to spey casting, it can take a while to get the hang of but I wouldn’t say it was too difficult. Once you have understood the mechanics of it and using the water to load your rod, it becomes quite easy.

Can you spey cast from the bank? 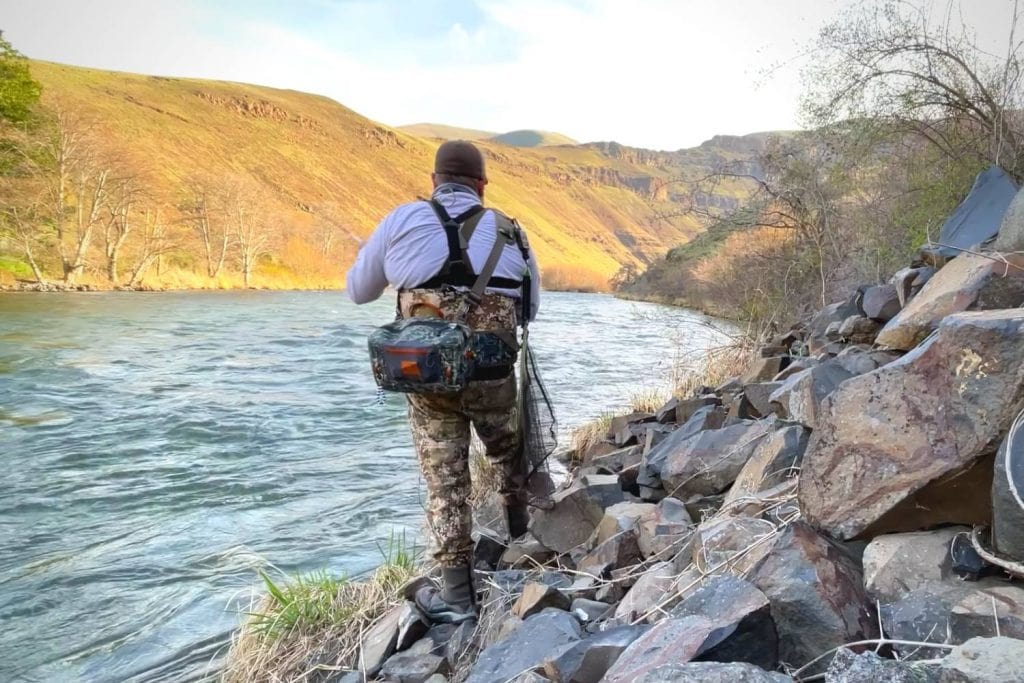 Unfortunately, spey casting from the bank doesn’t work as you need the line to be on the water so you can load your properly, and on the bank, your fly will just hook any vegetation around you. For spey casting to work, you have to be in the water wading.